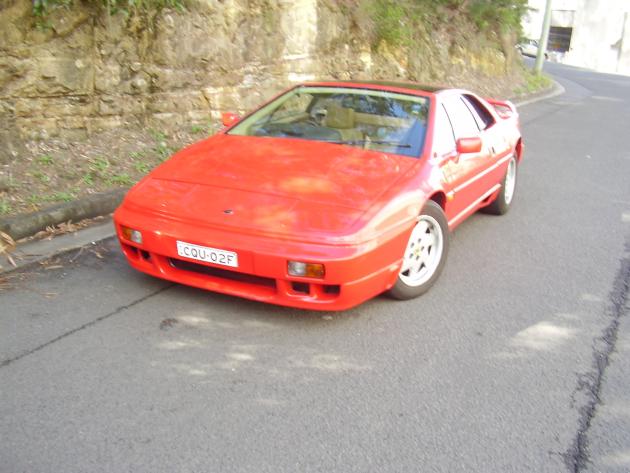 What is a Lotus Esprit Turbo X180 like to own and drive ?.

Of all of the many Modern Classic's that we could drive every day, the Lotus Esprit Turbo is one of the most pleasureable. In this third part of out "Drive Cars" series, we explore the myth's and realities of owning a Lotus Esprit.

We have driven this car for one year now, and have clocked up 21,680 miles in that ime, and have spent a total of AU$742 in that time. These expenditures are as follows :

Of course, there are certain things we do to keep the car running at it's peak, and to avoid all of the mistakes that lead to myth's. These are :

a) We check the oil and coolant levels once weekly.

b) We watch the temperature guage permanantly, and drive according to it, should it rise slightly. This car only actually has 2 of the 3 electric fans working due to us grounding out the front end, and even in yesterday's 38 degree day here in Sydney, there was no issue's at all, even with the air conditioning on full bore. The radiator cooling is therefore down by 33%, and it is still fine.

c) We cool the turbocharger down for AT LEAST 5 kms prior to entering our garage, where we leave the engine running at idle for a further 3.5 minutes with the cooling fans switched on.

d) We NEVER EVER accelerate hard or exceed 2500 rpm until the temperature guage is at 90 degrees, as one would do with any car, if one has an understanding of how engines are built.

e) We rectify ANY issue as soon as it materialises.

Now this car has been such fun to drive. It is not worth too much, and so it is fine to use every day, and we could even park it in a car park if need be !. The car's handling is totally superb, and carries around 11 kph more through a medium radius third gear corner than our Ferrari 355. It also keeps with the 355 up to 100 kph (60mph), which is not so bad for a 2.2 litre 4 cylinder engine. That is all down to the wizardry of Colin Chapman in the weight and aerodynamics area. The car is so easy to drive, quiet, smooth with no rattles or squeaks, and has such an awesome front-end turn-intop all bends. It could benefit from all wheel drive, although that would really be the only criticism of this everyday car, as it does go wildly sideways when one stands on the throttle coming out of the tighter bends. The other area of possible improvement would be the door mirrors, which are a little too small. The later S4's and V-8's had the bigger Citroen mirrors.

All in all though, and for AU$680.52 per year, this car has given us top value motoring. We will bring you the running cost's of one of our Esprit V8 Twin Turbo in another Blog, and so until then, enjoy happy Modern Classic Motoring.