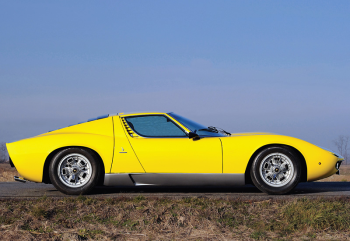 These cars have now plateaued in value, and will not rise any further, primarily due to their age (most of the people that admire them are becoming rather old), and secondarily due to the driving experience when compared with later, more advanced Modern Classic Cars with considerably higher performance. cornering and braking ability.

That said, this car is one of the last, and possibly most famous Miura's, and is the version that had different cam timing, as well as altered carburation. The engine on this car  has almost 382 BHP, and features the split sump. This new sump setup meant that the engine and gearbox oils were once again separated, meaning that an LSD could be fitted, and that any issues with gearbox debris reaching the engine lubrication system were dissipated.

The SV is quite distinguishable from other Muira's, and remains an iconic motor car in so many ways, having real classic lines and a real presence.