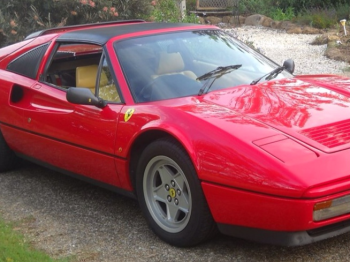 An original RHD 1986 Ferrari 328 GTS that was sold as new car in the UK by Maranello Concessionaires, and is one of just 250 non-ABS examples from 542 that were sold new in the U.K.. The car is finished in Rosso Corsa Red with new oatmeal leather upholstery as well as a black leather steering wheel. The carpets are original, yet are almost in the same condition as when the car was new. The car is in great condition throughout, and has been in Australia for most of it's life, having been imported from the United Kingdom a couple of weeks after being purchased. Due to the car's long time in Australia, the bodyshell therefore has a great underside with not even one corroded bolt or nut, as the car has never seen snow or salt as many European examples have

The car is definitely one of the best 328's that we have driven, and is very tight and responsive unlike most versions of this model. We feel that being an injected engine helps enormously, as the power delivery and smoothness of the engine is a radical change from the carburretted engines fitted in 308's.

The car has a very substantial history file that is leather bound, which includes plenty of receipts etc, and has had all of the suspension bushes replaced to tighten the car up, as well as an extensive overhaul of the braking system.

We can arrange an MOT on this vehicle should you require one, as well as all of the usual Dealer Facilities including financing etc.